Uriel Rivera is a student at UC Berkley, originally from Acapulco Guerrero, Mexico. He’s a student activist with Dream Team LA, The CA Dream Network and Dream Summer intern at the National Day Labor Organization Network. This is his arrival story.

My arrival story is a little different from many of the immigrant youth involved in the Dream Act movement. I arrived in this country in the summer of 2006, from Acapulco, Guerrero in Mexico. I left Mexico to reunite with my family here in the US due to the increased amount of violence that was taking place in Acapulco, which has now become one of the most violent places in the western hemisphere. 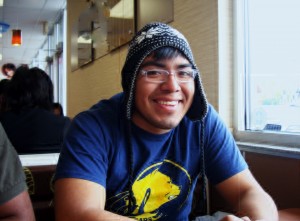 I crossed the southern border on the 4th of July. As I walked, my thirsty and tired body could see the fireworks of  celebration on the distance. Miles away from me, there were people celebrating a holiday that embraces freedom, equality and justice. For me on the other hand, I thought that the desert would become my resting place, that I would be added as another digit to the amount of people that have died in the desert every year, on their journey for a better life.

I never thought I would experience that journey on a personal level. For years, my family tried to find the way to send me to the USA with a visa, but unfortunately the guidelines and the application process was so complicated that my family didn’t have an option. It’s been a traumatic experience. Sometimes, I find myself waking up in the middle of the night thinking I just drowned in the river or that I have just drank the last drop of water from my canteen.

My border-crossing story, like many others, is part of the American experience. Media, politicians and the general public often ignore and neglect that the people who risk their lives to come and work here contribute tremendously to this country. Most of the time, we are used as the scapegoats and are blamed for the all problems that take place in different areas of the society.

My arrival to Los Angeles was in perfect synchronized with the aftermath of the largest mobilizations that have taken place in this nation. The organizing efforts against HR-4437 reached me, even though I didn’t participate in the marches and rallies against this bill. I soon found myself involved in immigrant youth programs supporting the CA Dream Act and the Federal Dream Act while learning the dominant language of what has become my new home.

After finishing high school in 2009, I pursued a B.A. degree in Ethnic Studies and Public Policy from the University of California, Berkeley. I was able to attend this institution thanks to the support of my family and from the money I received from several private scholarships. But being an undocumented college student was challenging, despite the funding and resources I had at my disposal.

There were moments when I didn’t have money to eat, buy books or pay for rent. Soon after my first semester, I started to have problems paying for school because on the continual increase in tuition. I had to make the decision to take some time off from school in order to save money and be able to return one day to focus on my education.

It’s been more than a year since I left Berkeley and almost 6 years since I left my country, but today I am a stronger person thanks to the mutual support that I’ve received from my peers in the same situation. I’m still saving up to go back to school, I hope to bridge that financial gap that keeps me away from getting my college degree, and be able to use my time more effectively helping my community without stressing out about my financial situation.

I’ve been able to witness many stages of this movement, suffering setbacks, but also being to celebrate many victories, most recently the Deferred Action announcement by President Obama. There is still a lot of work that needs to be done, I’m doing my part contributing with my time and energy to achieve the justice and equality the immigrant community deserves. The immigrant youth have proven that we can change the situation in this country, and I hope that one day we will be able to celebrate an independence day where freedom, equality and justice stand above the fireworks in the sky.