Executive Summary: The Senate bill focuses excessively on militarization of the southern border and criminalization of the undocumented community, and unjustly excludes millions from legalization and citizenship; DTLA to continue to push for the expansion of Deferred Action for all undocumented immigrants and to press politicians to stand against the militarization of the border and against the increase of senseless enforcement as well as alternative policies at the state legislation level.

After weeks of careful deliberation and extensive discussions amongst our members, DTLA has made the decision to oppose S. 744, known as the “Border Security, Economic Opportunity and Immigration Modernization Act”. This decision did not come easily, as an immigrant rights organization we are deeply aware of the daily pain and injustices faced by the undocumented community and for years we have actively worked to achieve justice in our community. We also understand that many had hoped that the Senate’s “comprehensive immigration reform” bill would provide relief for our community. Unfortunately, the bill that was voted on by the Senate does not provide that relief, and it is plagued with dangerous provisions that would have a catastrophic impact on our communities.

Please find a detailed analysis and explanation of why many of the Senate bill, S. 744, prove to be extremely harmful to our immigrant communities.For further questions or inquiries feel free to contact us by email at media@dreamteamla.org

Not a pathway to citizenship but a path to the marginalization, criminalization and exploitation of millions.

As currently written, the Senate’s bill claims to provide a 13-year pathway to citizenship for the majority of the 11 million undocumented immigrants living in the country. However, a closer look at the provisions of the bill makes it clear that a significant portion of the undocumented population will be excluded from any form of legalization. The congressional budget office estimates that at least 40% will be eventually excluded, other estimates put the number closer to 60%, and this means that anywhere from 4.4 to 6.6 million people will be excluded. What is more concerning is the fact that many provisions of the bill will make life for those who are unable toadjust their status and future undocumented immigrants much more precarious by increasing interior enforcement and implementing criminal penalties on undocumented workers.

The so-called “Border Surge” is a dangerous compromise that will essentially turn the Southern Border region into a war-zone. This amendment calls for the building of 700 miles of fencing and the deployment of the national guard, 20,000 more border patrol agents, drones and other equipment to the southern border. This comes at a time when the U.S.- Mexico border is as secure as it has ever been, unauthorized crossings and apprehensions are at their lower levels since the 1970s and the amount of resources allocated to border security is already at unprecedented levels. Therefore, spending $46 billion more dollars in enforcement will only serve the interests of defense companies and private prison companies that profit from the detention of immigrants. Furthermore, an increase in security in the border means more violence and even death for immigrants caught in a military zone. Every day immigrants die at the US-Mexico border, many of which die at the hands of border patrol agents. Still, there is very little to no accountability for those responsible for such tragedies. We can only expect higher levels of violence and death rates, with no increased levels of accountability for the perpetrators and no increased levels of safeguards for the victims, should the Border Surge become a reality.

DTLA to continue to fight for fair immigration policy

While DTLA does not support S.744, DTLA does support other alternative policies and legislation that humanely enhance the quality of life for undocumented people. In California, for example, DTLA supports the following legislation:

At the Federal level DTLA supports the following policy: 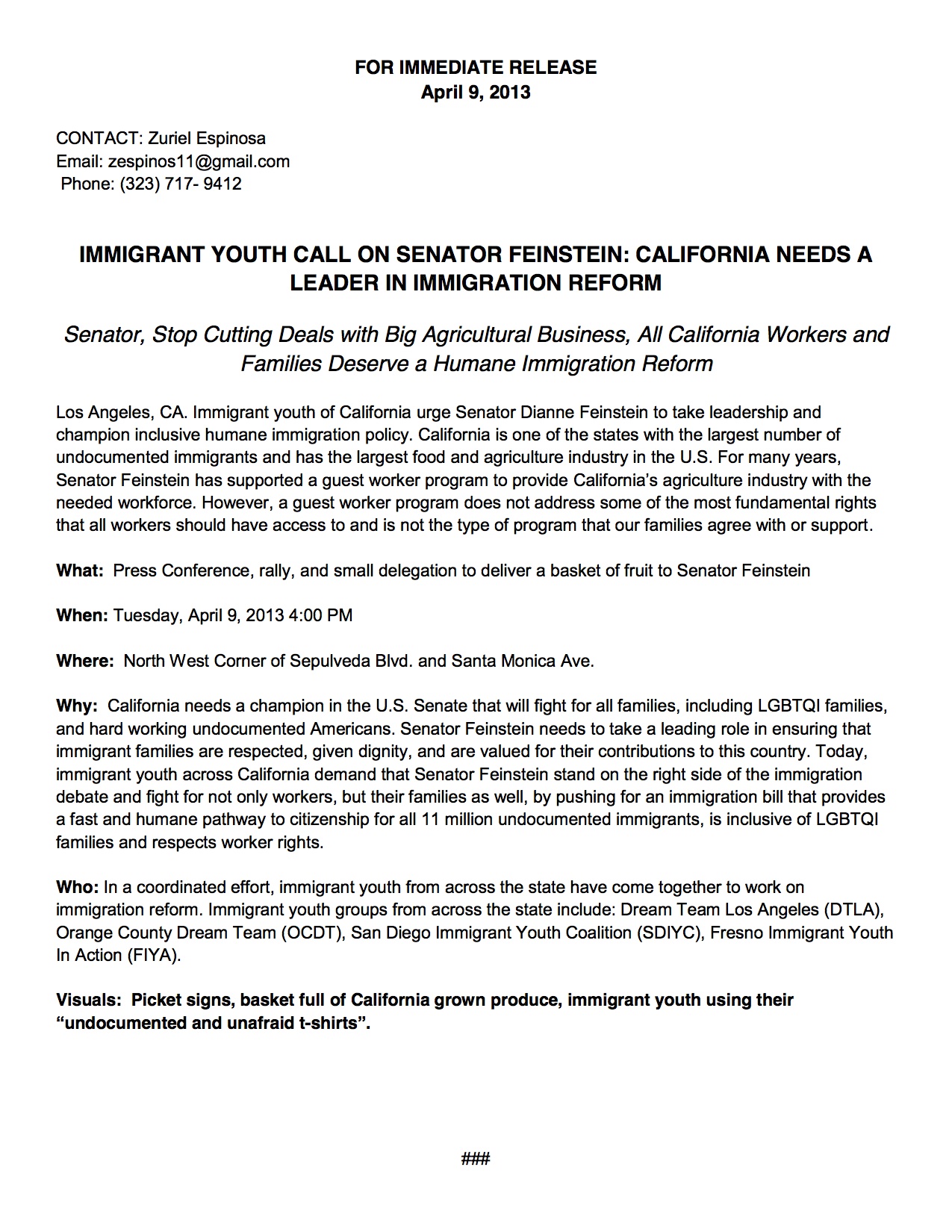