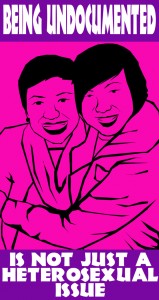 “What does being a queer have anything to do with the DREAM Act? Probably not the immediate meaning people want to see when they don’t immediately understand something. It’s about being part of a community that is constantly marginalized and finding strength in what others see as our weakness. It’s about finding a common ground and becoming a huge fist to punch the one bully we have in common. If you cannot see the connection, I don’t know what to tell you.” Folks know Julio Salgado for his art and being a member of dreamers adrift, but also for being, one of many, queer dreamers in the movement.

In October, Julio wrote for the Huffington Post on the intersectionalities between the immigrant rights movement and the gay/queer movements. “There have been sit-ins, hunger strikes and countless calls to lawmakers to stop the deportations of undocumented students who have been in this country most of their lives. Oddly enough, a movement within this movement has surfaced.”You see, a lot of the young people at the forefront of this movement also happen to be gay. Not only are these students proud to scream, “Undocumented and unafraid,” but some have challenged the status quo even further by coming out as queer, undocumented and unafraid.”