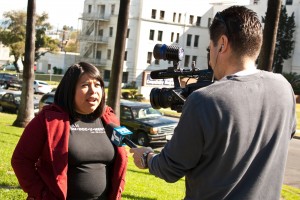 Dream Team LA members Nancy Meza, Carlos Amador and Erick Huerta were all featured for their open editorials and blog post on two different sites. All three members continued the ongoing dialogue of what it means to be young, undocumented while growing up in the United States with their individual contributions.

Both Nancy, along with Erick, contributed to the brand new “Dream Activist Blogging Series” on the Huffington Post, Latino Voices page. In her post, “Immigration Is Not Just An Election Year Issue, It Is A Reality Millions Of Undocumented People In The U.S Have To Face Every Day,” Nancy discusses the need for politicians and multi-million dollar corporations, to be held accountable for their role in driving immigrants from their home countries with unbalanced foreign trade policies, such as NAFTA.An excerpt from her piece, “What continues to be missing is an honest conversation of the role U.S foreign policy and multinational corporations have in driving families from their countries through economic exploitation. Resorting to an inherently faulty logic that refers to immigrants as “good/bad” and “legal/illegal”. Simply stating that a law is a law and therefore people must obey and follow does not equate to that law being just. We have to remember that in the history of this country, slavery was protected under the law, women have been denied the right to vote, Japanese Americans were placed in internment camps during World War II and LGBTQ people were placed in mental institutions as a result of their sexual orientation.”

In his post, Erick shared his thoughts on the changing identity of individuals in the undocumented youth movement, as both the youth and movement get older. In his post, “The “Dreamer” Stereotype – No Two Dreamers Are Alike,” he highlights how the term “dreamer” has become a sort of stereotype that is still changing and growing as individuals in the movement move on in their lives. Here’s an excerpt, “The undocumented student movement has its origins and roots with high school and college student activism, but after organizing within our communities for more than a decade, we’re hardly students anymore. I don’t think anyone ever gave a thought to what it would mean to be a 30-something Dreamer when this movement first started.” 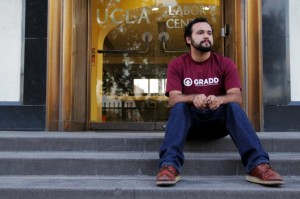 Carlos shared his personal story on how his family came to the United States, his experiences growing up and his continued struggles once he graduated form high school and got a BA and a Masters Degree. Tittled, “An American Journey, Unfinished,” Carlos goes on to highlight his struggles as motivators that pushed him when he needed the drive to continue on with school and make his family proud. Here’s an excerpt, “Storytelling is the most powerful tool that undocumented immigrants have in the fight for a better way of life. Every time I shared my story as an undocumented student, I felt like a weight was lifted off my shoulders. Our stories become a voice of dissent against unjust system that dehumanizes and exploits individuals.” 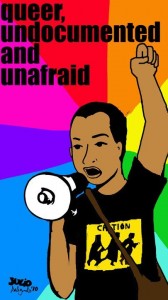 And last, but not least, Orange County Dream Team member Jorge Gutierrez was also featured on the Huffington Post for his work in building and connecting queer and undocumented communities. Jorge has been doing this work in Orange County and nationally for the last few years and has been changing lives everywhere he goes. Here’s an excerpt, “Jorge describes repeatedly struggling to be accepted with dignity since he was six years old and still living in Mexico, stating how he was rejected by his own father. “I knew I was different from my brothers, but I didn’t know how to explain it; but for my father, everything was clear. Society told him that people like me go to Hell. He was very repressive: don’t walk like this, don’t play like this, don’t speak like this… and then severed all relations with me, like I didn’t exist. He used to take my brothers to the country, or the city, without me. I felt ashamed and bad, and even considered suicide.”