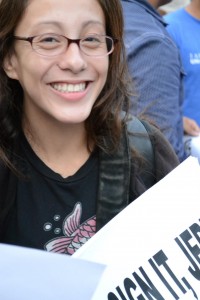 I immigrated to the U.S. at the age of two with my older brother, who was six at the time and although I was too young to understand the socioeconomic conditions that drove us to cross that desert, I distinctly remember knowing at the age of two that we were risking our lives. Even after all of these years, I still vividly recall that feeling of vulnerability and fear. I remember needing to go pee and not being allowed to because we were hiding from border patrol. I started to cry because I couldn’t hold it in anymore and my brother with a terror stricken face wrapped his only sweater around me, hugging me and told me that I was okay. And I believed him.My family settled in South Central L.A., a city that to most people, sounds like a nightmare regardless of social and legal status, but to me it is home. The hood, as it is often referred to, can sometimes eat you alive. Although my brother is still around, I feel that the city took away my only brother and my only male role model. The city took him into gang violence and deeper poverty, to the point where many people don’t know that I have a sibling.

I can’t imagine how difficult life might have been for him, to at such a tender age, be given the responsibility to look after me and prosper in this world full of discrimination and greed. I don’t know what made him give up on his dreams. Maybe it was the friends who he identified with, the fact that we were raised without a father or maybe it was that the dominant group set him up for failure. The same way it’s done to many young men without any means and support. The reality is that my life isn’t any different from any other dysfunctional family. Citizen or not.

I do feel a sense of entitlement when it comes to having equal rights in this country. Never mind the fact that my family came here because of the economic imbalance that shifts in favor of the U.S. Leaving us with little to no chance of survival in Mexico. Never mind that this was Mexican territory to begin with, but the reason why I feel that I belong here is because without knowing of my legal status, this country embraced me as its own.

In school, I was shown endless possibilities of careers that I could have, while making  a difference in this society. I want to contribute back to the community that saw me grow up. Not for money or fame or to take away from any other student’s financial aid. “I don’t want to rule or concur anything. I should like to help everyone if possible,” like Charley Chaplin said in The Great Dictator.

It is important that people understand that many dream act students have stories like mine and all we want to do is help create a better society. We are on the side of the people, and we can’t create the change that we so desperately need alone, we need your help. The California Dream act especially, AB 131 will allow eligible AB 540 students who in most cases, are in great need of finical help.

They want to contribute to this economy and be able to have the opportunity to apply for private scholarships and state funded financial aid. I urge whoever is reading this to not give into the negative stereotypes placed on undocumented youth by a few wealthy elites and people who are afraid of the unknown. Let us show you what we can do for this country, a country of opportunities made by immigrants.