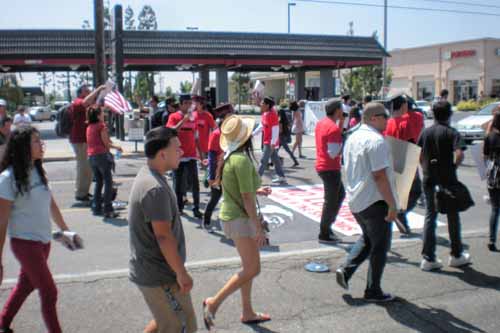 We had heard from campus activists that students would get tickets for things like riding bicycles without lights, and this would trigger deportation proceedings when campus police reported the incidents to DHS.

The 287(g) program would change names several times, being known as S-COMM (Secure Communities), then PEP-COMM (Priority Enforcement Program). While it still exists, the civil disobedience actions would cause San Bernardino, and other California counties to end their participations in the program. Later, the State of California would pass legislation ending local participation with the federal deportation process.

Participants in this action would form the San Gabriel Valley Dream Team, then later the Immigrant Youth Coalition, Inland Empire. It came on the heels of another action in Atlanta, Georgia coordinated with the National Immigrant Youth Alliance (NIYA). In Atlanta, undocumented youth activists were protesting Georgia’s HB 87 law which authorized police to question the citizenship of anyone they deemed to be an “illegal” immigrant. It also prevents non-residents from holding professional licenses.

These twin actions are highlighted in the below video.