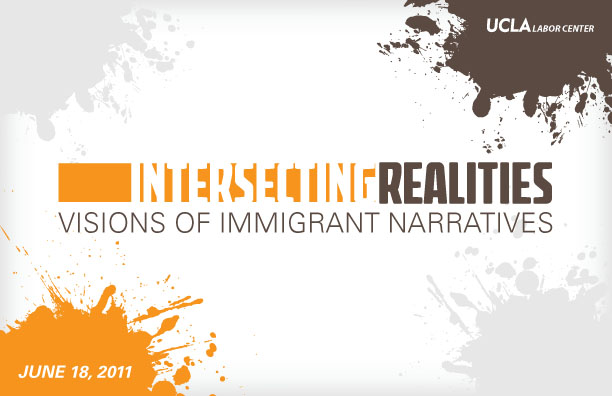 Please Join us for “Intersecting Realities:Visions of Immigrant Narrative,” Art Exhibit on Saturday June 18, 2011.
We will be showing the work of Pocho1, Im;Arte and Julio Salgado. We will also be Unveiling of DREAM Mural and premiering the latest video from Dreamers Adrift. Poetry by Janet Gonzalez, Jesus Iniguez, Mariella Saba and Erick Huerta.

Food and drinks will be provided. 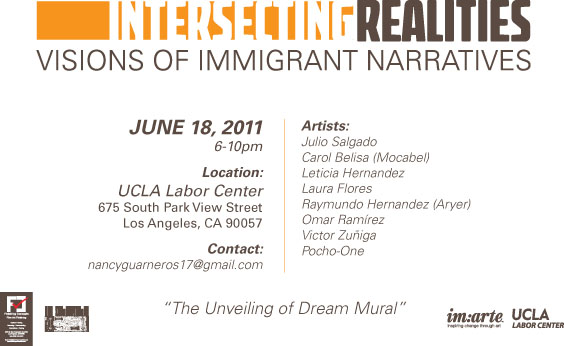 This project was inspired by the life of Cinthya Felix and Tam Tran, one of our great women Dream Act leaders who passed away last May. Tam was an activist, film maker and scholar. Tam was also a loving sister, friend and daughter. Like many undocumented students, Tam had different identities that many people don’t see.Through this project we plan to capture these different identities, in order to put a human face on the immigration story

In this project, we will follow seven Dream students throughout their entire day. We want to capture them with their families, friends, at school, at work, and in their communities.

International photographer Pocho-1 documents political and cultural movements. He began fighting for the interests of his community while furthering his education at Cal State Northridge. Studying under Rudy Acuna, founder of the first Xican@ studies department. Moving back to the Bay Area, he attended San Francisco State University earning a MA in Ethnic Studies. He is presently pursuing his 2nd Masters at USC Rossier School of Education. For more information please visit: http://www.pocho1.com/

IM:ARTE
Im:arte was created by a collaboration of artist that believed deeply in something bigger than themselves, “a social movement powered by creativity and imagination.” Carol Belisa (Mocabel), Laura Flores, Leticia Hernandez, Omar Ramirez, Ray Hernandez (Aryer), and Victor Zuniga worked diligently to launch Im:Arte Collective, their work will be displayed.

Julio Salgado is the creator of the online comic strip “Liberty For All,” which follows the life of a young undocumented college graduate named Liberty. His activist artwork has become a staple of the DREAM Act movement. College students across the country have used Salgado’s artwork to call attention to the DREAM Act.
His work has been praised by OC Weekly’s Gustavo Arellano, KPCC-FM 89.3’s Multi-American blog and the influential journal ColorLines.
Salgado is a recent California State University, Long Beach graduate with a BA in journalism.
To see more of his artwork and other collaborations, you can go to DreamersAdrift.com and http://juliosalgado83.tumblr.com/ 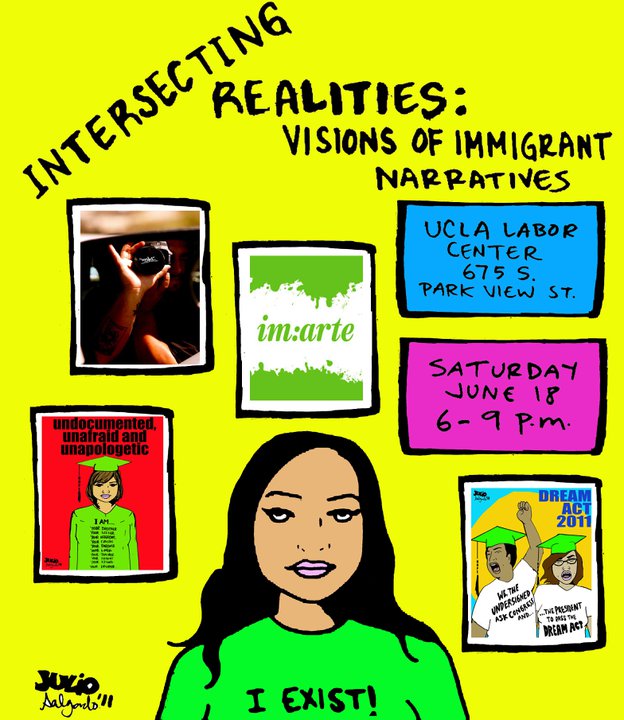